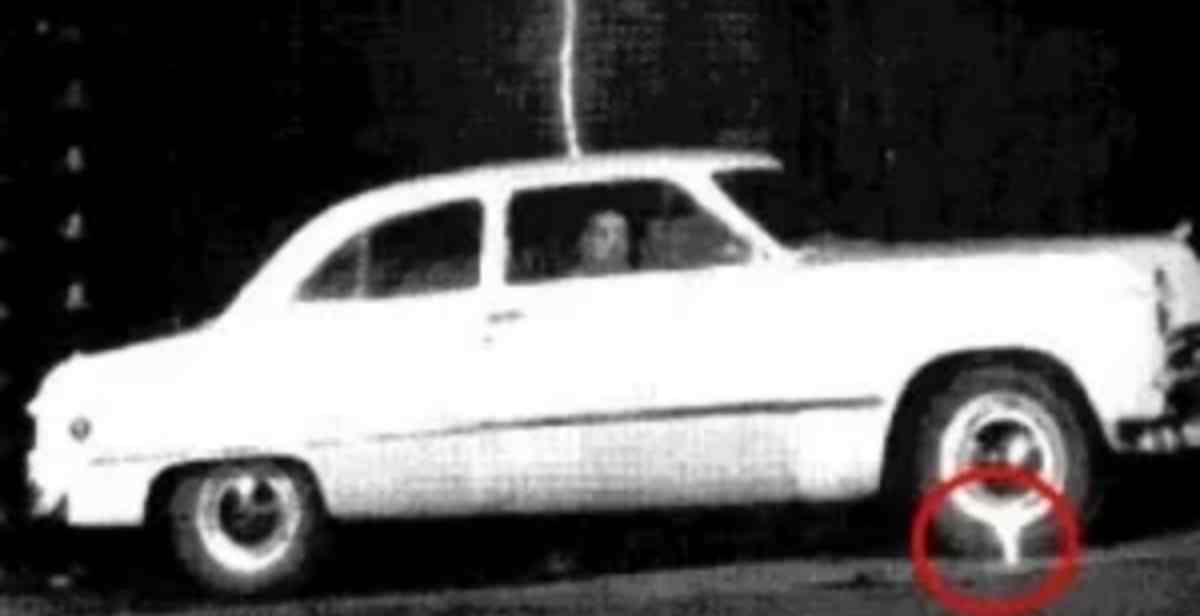 When lightning hits a car, its charge moves through the car and jumps the final gap beneath the car from the lowest steel point to the ground.

Due to the Faraday cage of a car, the occupants are not affected, and the car body contains the lightning charge until it earths. The vehicle engine might misfire, but recovers once the charge exits the vehicle.  Moreover, lightning may not spare the electrical system of the car.

What Happens When Lightning Hits a Car

What happens when lightning hits a car depends on the lightning intensity and car. If the vehicle windows are wound up and the body is all-metal, i.e., not a convertible, lightning might flow over the external car body down to the ground. Therefore, an all-metal car shelters the occupants.

As mentioned earlier, the vehicle electronic systems will be damaged due to the voltage surge surrounding the vehicle frame at the time.

If the lightning discharge hits the tires, they can burst. Also, if the Engine Control Unit (ECU) is struck, the car engine will stop running, bringing the car to a halt. An older vehicle may remain drivable since it hasn’t electronic system lightning will hit.

Meanwhile, below are things that can happen when lightning strikes a car:

A high-energy lightning strike can cause a car to explode or at minimum, lights the car on fire. It is capable of inflicts burns on the occupants and may result in death from cardiac arrest.

A medium lightning hit/strike might have increased damage and leaves a scorch mark. It can melt the car metal, burn fuses, frames, light up the fuel tank or destroy the ignition. Vehicle occupants might suffer minimal injury.

A low-energy lightning strike might leave nothing. It is contained by the car body until it earths. No passenger is hurt, except for the sudden shock that follows.

As mentioned earlier, the outer conductive shell of a vehicle acts as a Faraday cage, which protects occupants from getting severely injured or not injured at all.

If you drive a car under a heavy downpour, the lightning strike can melt the car antenna. The car will continue running, and the radio will still be functional (if it was playing at the time of the hit). You’d only have to replace the forged antenna.

What Happens When Lightning Strikes a Car Outside

When lightning strikes a car outside, literarily no damage occurs beyond the burnt spot during the lightning hit on the car. This claim is not always true, depending on the striking intensity.

Below are the things that can happen to a car outside that is hit by lightning:

A Car with Closed Windows is a Safer During Lightning

A car with closed windows is safer when lightning strikes because glass is a better insulator than water-laden air or air. A closed window blocks the path lightning might follow inside the car.

Many experts believe that car tires provide ground insulation that prevents lightning, but this claim is not entirely true. Lightning goes thousands of feet from the cloud to the car, so it is not easily obstructed from going the last 6 inches from the axle to the ground. Moreover, this has nothing to do with the safety of the vehicle passengers or occupants.

Can Lightning Damages an Electric Car?

Some experts believe that the rubber tires insulate the car from the ground; thus, the electric car is protected from high impact hits, except some metal hangs down to act as the energy conductor. The outcome would typically be a static charge. Nonetheless, the electric surge will go through the metal body of the electric car, which is the convenient transmission pathway.

Like an ICEV vehicle, the lightning charge can damage electronics, similar to burning electronic household appliances such as the television.

The occupants or passengers are safe in an electric vehicle struck by lightning, except an occupant is holding a metal outside the vehicle. Nonetheless, the chance that an occupant would be hit is low since there is no path for the current to move through.

Can Lightning Damage Electronic in Car?

Yes, lightning can damage the electronics in a car. Depending on the lightning intensity, it can fry the electrical system of a vehicle.

What if the Car Tires Are Wet?

If the tires of a car – moving or stationary, is wet, which is possible during thunderstorms, water can conduct the energy from the metal wheels to the roadway. Roads are not excellent grounds for electrical discharge, but water can make them a good conductive path to the nearest ground. The hit can affect the electrical system of the vehicle, radio, tires, metal damage, but is unlikely that passengers would be affected. Lightning surges can also burn out the wiring of a vehicle.

How a Car Discharges Itself When Lightning Strikes

When lightning strikes a car, it discharges itself through the tires to the ground. Car tires are not excellent insulators but are capable of conducting static charges. Although not instantly, it works.

Some people gas their vehicles and get back into it. During winter, it can build up a charge that causes a spark, leading to a fire. Prevent a possible fire outbreak by avoiding contact with the car metal when out to fuel with the hose.

What to Do When Lightning Hits the Car

When lightning hits your car, pull over and stop the car. Note that the metal of a car conducts electricity and discharges it through the rubber tires into the ground. Do not exit the vehicle until the intensity drops. The interior of a car is safer during lightning.

The metal of car cages against lightning impact. When lightning charges, the vehicle metal confines it and discharges it through the tires to the ground. With car windows closed, and occupants/passengers are not holding any car metal or electrical components, no impact on them.

When lightning meets you during a lightning storm, remain inside the car, and do not hold any metal. Drive the car to the side of a building or a nearby garage. You may also park under a highway overpass. Just do not keep driving, especially on hilltops.