Howdy, Driver? What is open title on a car? An open title occurs when a seller signs the back of a title but leaves the buyer’s section blank while transferring ownership. 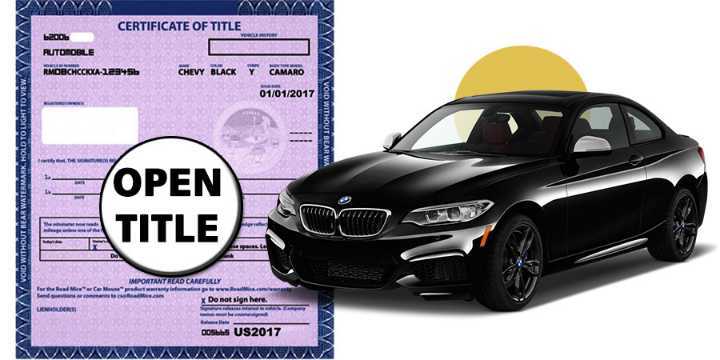 Typically, an open car title is used for a scheme such as jumping title also called title skipping, which is illegal.

If you sell or buy a car with an open title unknowingly, you subject yourself to risks not limited to transacting with a car that may have been sold already. Though you are liable for the car, transferring the ownership of the car could be challenging since there is nobody to sign over the title appropriately.

One percent of the time, it can happen that the DMV rejected the title due to omissions or putting a signature in the wrong place. If the seller or the person whose name is on the title cannot assist, you now have a vehicle you cannot register until the title is transferred.

Let’s make an assumption: Mrs. Theresa buys a car with an open title worth $740 from Mr. Stephens on eBay. Mr. Stephens refines the car, lists it on Craigslist and is contacted by Mr. Joe that pays $1,900 to acquire the car which is title jumping. Mr. Joe now owns an open title car that cannot be registered, so, he forges Mr. Stephens’ signature on the title certificate to be able to register the car.

It happens most of the time and most agencies overlook it since it might prove abortive to trace the activity.

What is the Use of Open Titles

If you buy or sell a car with an open title, you are title jumping and no ownership will be recorded with the DMV or responsible agency in your state.

With an open title, an unlicensed or a licensed seller can flip cars while avoiding sales tax, registration charges, and applicable taxes.

Moreover, a curb-stoner can use an open title to bypass the limit on the number of cars they can sell as unlicensed dealers in a year. Apart from selling multiple cars without a dealership license, they also evade taxes and registration charges.

Why You Should Not Buy a Car with Open Title

If you buy a car with an open title, you may be paying for a car with problems and that may have been sold several times without a registered owner, which prevents ownership transfer.

Typically, the certificate of title will not display the lien until you get to the DMV. If you are fortunate, you may be eligible to pay off the lien or go through the tedious steps of locating the last owner registered on the title.

The Risks of Selling a Vehicle with Open Title

Typically, as the seller of an open title vehicle, you may be held liable for the car because no title transfer is taking place.

You may start receiving parking tickets, registration renewals, and other charges recorded by the person that bought the car from you.

To relieve yourself of the liability, you must file for the title transfer, which requires you to be the legal owner of the car. In California, for example, a seller can file a Notice of Transfer and Release form to stop being liable for the car.

However, you would have to be the registered owner of the car, which implies that you must put the car in your name.

Problems of an Open Title

Sapling assessed some of problems related to open titles.

Below are the problems associated with an open title:

To register a car title with a state, there must be a name on the title. If the title has been without a name for a long time, it indicates that you have been avoiding taxes, and it is illegal to avoid paying taxes.

An open car title carries no contact information. Thus, if there are records such as parking ticket fines, impound fees, the seller would be liable for the record because they are the last known owner of the vehicle.

If a car was declared salvaged by an insurance company or exposed to a disaster like a flood, the title carries none of the records until it is transferred. In this regard, an insincere seller can sell a salvaged car as clean.

Is an Open Title Legal?

If you are found associated with an open title, you will be liable for the sales or use tax on the fair market value of the vehicle and a penalty of about 25 percent fine.

Moreover, the vehicle will be impounded by the local or state law enforcement until you prove ownership of the vehicle or locate the last person whose name is registered on the title.

In some states, you are given 30 days to claim ownership of the vehicle; otherwise, the agency will consider the vehicle abandoned and the commissioner of safety will dispose of it. Typically, the car is put up for auction by the police impound.

Note: If an insurance company is authorized to underwrite policies on motor vehicles as a result of a paid claim, they can also endorse a change in ownership on the title without registering with the sales and use tax department.

How to Avoid Buying an Open Title Car

Before you pay for a car, request the title certificate and confirm that the name of the seller matches the name registered on the title. If the names do not match, it is a sign that the car has an open title.

Also, you can check for title liens using a private title search company to detect an open title.

As a seller, you can mitigate the risk of selling an open car title by completing the required paperwork at the AAA or the DMV before selling the car.

According to TNclerks, it is a misdemeanor for a seller not to deliver the certificate of title to the appropriate department before passing it onto a buyer.

Moreover, it is also unlawful for a lienholder to fail to report the discharge of a vehicle title to the appropriate department within 73 hours or more, depending on the state, from the date of discharge.

For a title transfer to be completed, the seller must put the car in their name and sign over to the buyer that must not fail to put their name on an endorsed certificate of title.

Therefore, it is illegal to possess an open title for a car until your name appears on the certificate.

2. Problems Buying a Car With an Open Title. Sapling.