It’s likely that if you own a car, you have sometimes seen RPM fluctuation while driving. The majority of drivers can tolerate this as a minor irritation. However, if your vehicle seems like it is shaking when you press the gas pedal due to the RPM fluctuations, there may be an underlying issue that has to be addressed sooner rather than later.

RPM fluctuation while driving is a typical sign of filthy or worn-out spark plugs because unclean or worn spark plugs are unable to provide the right spark required to ignite the gasoline at the proper moment. This causes the RPM to fluctuate when driving, accelerating, or while the engine is idling. 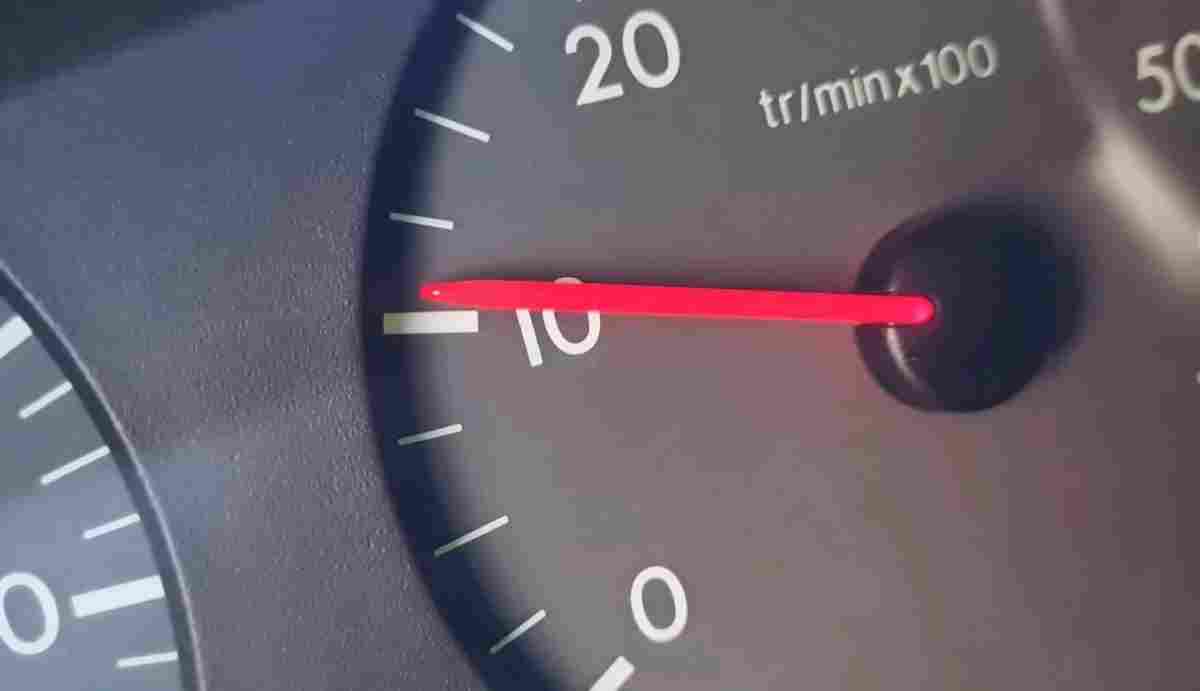 RPM, which stands for revolutions per minute, counts how many times the crankshaft rotates each minute together with the pistons rising and falling in the cylinders. The RPM is then shown on the tachometer of the vehicle, often as rpm or r/min on an analog dial or digital display that has been calibrated. The RPMs will rise while you’re accelerating and finally fall when you let off on the accelerator.

When running regularly, engines typically rev up to 4,000 to 6,000 RPM before shifting. However, depending on the kind of vehicle and motor, this figure can change.

Causes of RPM Fluctuation While Driving

If your RPM is fluctuating, below are possible causes:

The idle air control valve or IAC in your car is often to blame when your RPM changes while accelerating. Fuel-injected engines include an idle air control (IAC) valve on the throttle body that electronically controls airflow to adjust the engine idle speed in conjunction with the vehicle’s ECU.

RPM variation that is caused by an idle control valve issue is often the result of communication problems. For the IAC and ECU to correctly control airflow and keep RPMs constant, they must communicate. The IAC cannot function correctly if there is any interference, and you will probably notice changes in RPM. Engine stalling and rough idling are two additional typical signs of a faulty IAC.

RPM fluctuations while driving are often brought on by unclean or worn-out spark plugs. Spark plugs progressively deteriorate with use and must be changed to maintain appropriate operation.

The gasoline won’t ignite at the proper moment if your spark plugs aren’t firing properly, which often results in the RPM fluctuating when accelerating.

It is not unusual for spark plugs to need replacement as soon as 30,000 miles. However, changing spark plugs in a vehicle is often a simple procedure that you can be able to do on your own.

If the clutches or friction discs for that specific gear are sliding, the RPM in an automatic may briefly increase. Additionally, it may occur if you downshift into a lower gear or if the shift modulator is broken or misaligned.

When the accelerator is depressed while the engine is under load with a manual gearbox, the clutch might slide, causing the RPM to spike. A transmission leak and lower-than-normal fluid levels could also be the cause, which would prevent the torque converter from working properly and raise engine revs.

In situations like this, you’ll probably need specialized tools and some background in auto repair to diagnose, repair, or even replace the transmission gearbox entirely. We strongly advised having a mechanic take a look.

A crankshaft position sensor is a tool used to keep track of the crankshaft’s location or rate of rotation. This data is then used by the engine control module to regulate the timing of the ignition system and fuel injection.

Assume the crankshaft position sensor is malfunctioning. Since the engine is not receiving accurate information regarding the location of the crankshaft in such instances, the RPMs may vary.

Your vehicle can have difficulties starting, shut off while you’re driving, or experience increased vibration if your crankshaft position sensor is damaged. It is advised to use an OBD2 scanner to check for relevant fault codes, such as P0335 or P0338 if you experience any of these problems.

When the TPS is malfunctioning, the car will accelerate on its own whether or not the gas pedal is pressed, which may result in rough idle and observable RPM fluctuations.

Poor fuel efficiency, reluctance while accelerating, and an illuminated check engine light are other signs of a faulty TPS. The most common reason for a malfunctioning throttle pedal position sensor is rust or debris on the contacts, which may be cleaned. Another reason for it can be a wiring problem.

The throttle pedal position sensor might malfunction, in which case it would need to be replaced.

Delivering the gasoline required for the engine to function effectively is the function of the fuel injector. The engine may not get enough gasoline, however, if the injectors become blocked (by dirt and debris).

This may lead to a multitude of problems, such as jerky motions, variable RPM, or the car not accelerating as it should. However, the same symptoms might also be caused by vacuum leaks or dirty or damaged spark plugs.

The fuel injectors can be cleaned, but ultimately, they will need to be replaced because of wear and tear. A car’s fuel injector normally lasts 50,000 to 100,000 kilometers.

A tachometer is designed to endure the life of a car, however even though damage to the tachometer is uncommon, it might occur and should not be disregarded.

If the tachometer in your contemporary car is broken, you may need to replace the complete set of gauges that the tachometer is a part of. Due to the high cost, it is advised to use an OBD2 scanner to check for other issues first.

Grit and other materials in the gasoline cover the fuel injectors. While this occurs, the car may have jerky acceleration and lose power when trying to accelerate from a stop or keep a consistent speed. The performance of your car might deteriorate, and its fuel economy would considerably decline.

What to do if your car’s RPM fluctuates while driving

As you accelerate, if your engine’s RPM changes, you should think about getting it repaired immediately soon. Your tachometer will alert you to an issue developing in your engine’s combustion chamber. To prevent it from becoming worse, you’ll want to identify the issue and choose a solution as soon as you can.

Frequently, all you need to do is replace your old spark plugs with new ones. This is a simple fix that will reduce your RPM quickly. However, you’ll need to think about your options if you have more severe engine problems. If you want to maintain your car, you could determine that engine repairs are necessary; nevertheless, you have the choice to sell it to avoid having to deal with costly repairs.

You’ll want to do something with your car, whether you decide to fix it or get rid of it, to prevent placing yourself in a potentially hazardous situation.

Repairing RPM fluctuations might cost anywhere from $50 and $1000 or more. Without understanding the source of RPM variation, it is very difficult to estimate the cost of repairs.

As you can see, there are several possible explanations, some of which are simple and affordable to address while others may be more challenging and pricier.

You may have to spend $50 to $100 if you decide to do a DIY tune-up to see whether the issue can be fixed by changing the spark plugs, the air filter, or the fuel injectors.

You should prepare to spend between $150 and $300 if the fluctuation is brought on by a malfunctioning crankshaft position sensor or throttle pedal position sensor. In addition, depending on where the leak is, detecting and fixing a vacuum leak might be one of your more costly repairs, costing anywhere from $150 to $1000. On the other side, one of the costliest repairs or replacements a technician can do is to a transmission gearbox.

You could think about purchasing a newer vehicle if your current vehicle is outdated and not worth the money.

Why does my car’s RPM fluctuate when traveling at constant speed?

With an automatic gearbox, the engine downshifting and then shifting back up may be a typical effect of the RPM varying at a constant pace. This results in a minor acceleration of the vehicle, and it often happens as a result of an increased load of some type. However, it can indicate a transmission problem.

Can low RPM damage the engine?

No, not in everyday situations. Increasing the car’s speed is harder to do when the engine speed (RPM) is low. The temperature of the engine and the cylinders will both increase as a consequence. If you’re simply cruising or slowing down, low RPMs are OK, but when you accelerate, they put your engine at a gearing disadvantage. This is the potential start of engine damage.

What does it mean when my RPM fluctuates?

There are several reasons why your RPM fluctuates. You will likely need to change the fuel pump or the air filter if you observe that it only happens while accelerating or idle. If it occurs both while accelerating and while idling, your idle control valve probably needs to be repaired. Always be sure to get anything out of the usual examined by a specialist if you detect it.

How do I fix RPM fluctuations?

This question does not have a universally applicable solution. RPM variations are best fixed by consulting a technician and having them identify the issue. They will be able to suggest the best line of action after the issue has been identified.

Driving-related RPM fluctuations can be brought on by a variety of factors. While some of these factors are simple and affordable to address, others could be more challenging and pricier.

Start with the easy issues, such as the fuel and spark system, and work your way down the list of potential reasons when identifying the source of your car’s fluctuating RPMs.