Howdy, Driver? You need to know how a thief can sell a stolen car. So, if you ever hear of a stolen car, you know what to expect the crook to do next.

A criminal can use a fake car title, fake bill of sale, and even a fake auto insurance card and a fake drivers license to deceive an unsuspecting buyer into buying a stolen car.

Either a crook will sell a stolen car online or they chop-shop the car and earn from selling the parts. Nevertheless, some criminals dare to sell a stolen car as it is online on popular sites such as Craigslist and eBay.

How a Thief Can Sell a Stolen Car 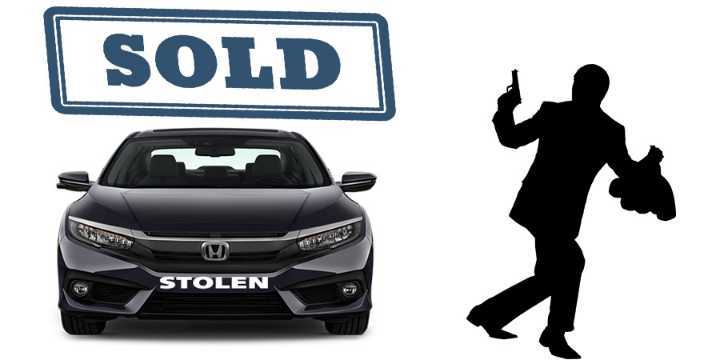 In this section, I highlight the typical ways to sell a stolen car as crooks do.

Below are the ways a criminal can sell a stolen car:

According to the police, the criminal enters a deal with a dealer (that may be a crook as well). The dealer contacts the insurance auctions and purchases wrecked cars. He outbids everyone in the auctions, especially because the fellow bidders run body shops and junkyards.

When the insurance ends the auctions, they contact the dealer that pays off the price.

Why is the dealer so obsessed about buying the auctioned car? They do not buy the car from the auction because they would love to. Instead, they bid for the car because it matches the stolen car in their custody.

When the dealer acquires the auctioned car (typically salvaged) for a bargain, they rip and switch the usable parts with the stolen car.

The only parts on the stolen car that are not touched are the parts with VIN. Nonetheless, dealers with sophisticated tools modify the VIN on the VIN-engraved parts of the car.

The crooks are simply giving a new clean identity to the stolen car that is sold later to a buyer. Of course, the buyer never gets into trouble because the VIN was switched properly.

A typical chop shop is an illegal business that rips stolen cars into parts sold as legal in the market.

After the vehicle is stripped down, the parts are sold to auto repair shops and profits are made.

Since the police have no trace of the other parts of the stolen vehicle or the person to arrest, they will inform the owner of the car and the insurance will auction the car.

The criminal can bid and acquire the parts with VIN, which becomes legal. He can now recouple the stolen car and sell it without fear of getting caught because it is now legal.

A daring criminal can sell a stolen car intact to a buyer overseas. Within a few hours, the car is in a premium freighting container about to be shipped to a different country or continent for sale.

To cut off delays, a criminal may not wait for a buyer overseas to pick interest in the car. They can simply ship the car with claims that it has been purchased to a new country, typically a lawless country, to cool off the heat. They may then sell the stolen car in the new country or ship it to a farther country for sale.

An auction website like eBay makes a great platform for a thief to sell a stolen car. He tricks buyers with a mouth-watering offer and nobody is willing to miss the opportunity of acquiring an expensive car for less.

An investigation by BBC, for instance, shows how at least 3 eBay accounts were involved in selling stolen cars. The criminals preferred cash on collection and all accounts are closed immediately after the deal goes through.

Craigslist is another goldmine for a crook to sell a stolen car. They put up the car for sale at a ridiculous price and the bids rain online in a matter of minutes.

A criminal can forge the paperwork to sell a stolen can in the same state or a neighboring state.

When a criminal acquires the stolen car, he launches software like Photoshop and creates a fake pink slip or title certificate. If they have the time, they may alter the registration information and attack fake license plates on the vehicle.

He may put up the car for sale on a local e-commerce site where a buyer bids, contacts him and a deal is sealed.

Typically, crooks do not accept bank transfers or checks. They demand cash so that they do not expose their identity after getting away with selling a stolen car.

How Much Can You Make Selling a Stolen Car

Selling stolen cars is not a one-man affair. Beginning from the chop shop to the crook dealers, some money is spent to get things in place and get away with selling the car.

If a crook dares to operate alone, then they can make about 80 percent of the value of the vehicle alone.

Before you buy a car, insist on seeing the title of the car. Note that you can be issued a modified or a fake car title. Scrutinize the information on the title and be sure it corresponds with the details of the seller.

A VIN check is crucial when buying a used car. A crook can issue a switched VIN and if the VIN was switched properly, you will not detect it and you will likely run into trouble driving the car. Nevertheless, scrutinize the VIN thoroughly and inspect the parts of the vehicle that carry the VIN.

If you notice that the car you are driving is stolen, do well to report to the police.

If a thief finds it difficult to sell a stolen car at a reasonable price, maybe because it carries a salvage title, they can wash the title and sell the car for an amazing bargain.