Howdy, Driver? In this article, I will answer the question, “what is title washing?” First, note that title washing is a crime that erases the true title identity of a used car. 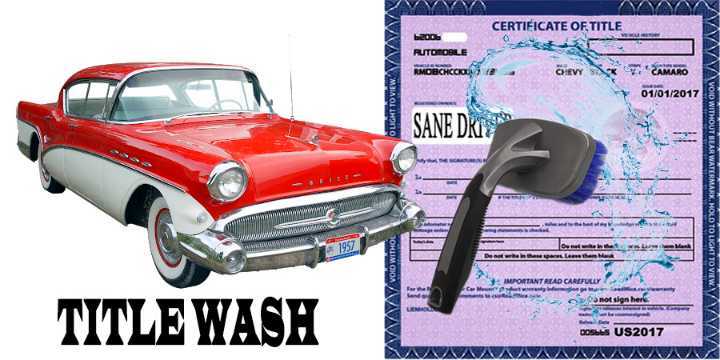 When the title identity of a car is erased, a buyer is unable to establish the condition of the car they are paying for. For example, if a car was involved in a crash of 75 percent damage and given a salvage title, a buyer or the new owner will be unaware.

If the car is involved in another crash, it endangers the life of the new owner because its panels are unable to resist the crash.

Let’s discover what title washing of a car means.

What is Title Washing?

Title washing is an act that conceals the true title identity of a used vehicle. When a car title is washed, it stops a buyer from getting accurate information regarding the condition of the vehicle.

When you shop for a used car, it is vital to obtain information about vehicle history. It could be that the used car you are buying was involved in a severe crash that makes the car undrivable and it was towed to a junkyard.

Also, the car could have been involved in flood damage that causes electrical and corrosion problems; thus, making it difficult to repair the car.

If a car was involved in a severe crash or a disaster like a flood, the car is given a rebranded title after it passes an inspection test. There are various title brandings such as salvage and water damage. For instance, if a vehicle is involved in a flood, it will be issued a water-damage title. But if an insurance company declares a vehicle a total loss, it is given a salvaged title.

There are laws meant for consumer protection against buying cars with high degree damages. Nevertheless, an insincere seller can still manipulate the title of a car and conceal its information before selling it to an unsuspecting buyer, which is known as car title washing.

Though the act of title washing typically rebrands the title of a car after severe damage, it could also be used to conceal the true lienholder of a car.

Regarding how to wash car title, you can wash a car title in the various ways below:

A common way to wash a car title is to move the car from one state to another.

Various states each have varying laws regulating the branding of car titles. Insincere sellers then take advantage of the differences in title branding among states to wash car titles, thereby concealing the true title information of a car.

To remove the title of a car, a car is moved to a different state that does not recognize its title brand. Some of the states to source title-washed cars are California, Georgia, Illinois, New Jersey, North Carolina, Tennessee, Texas, Virginia, and Washington.

Another way to wash a car title is by applying for a replacement title without revealing the history of the car. To get a new title for a car, the owner or the insurance company must present the damage report on the car. If a report is not presented to indicate the damage report of the car, the title information will not reflect in the new certificate. Thus, the title of the car is not branded and it retains a clean title.

An insincere seller may wash a car title by altering the title physically. Since the title certificate is in the form of paper, a seller can modify the information on the document; thus, clearing traces indicating that the car title is rebranded.

Sometimes, the seller may create a fake car title for a vehicle.

In 2018, for instance, the Harvest couple was arrested in connection to a title-washing scam. They were each charged with first-degree theft by deception, possession of the forged title, and practice of deceptive business. On release from the Limestone County Jail, both were fined $8,500 bond.

Another instance of title washing was recorded in Oregon where an employee in the Oregon Department of Motor Vehicles was arrested in the title washing scheme. It took the collective work of the FBI and state police to fish Zakharov because the criminal act was considered a public corruption.

How to Avoid Title Washing Scam

Amidst the recurring reports on title wash scam, what can you do to avoid buying a title-washed vehicle?

Below are tips to avoid buying a title-washed car:

A common tip to identify a title-washed car is to obtain a tracked and complete history of the car.

Sometimes, the title of a car does not record every title information of a car. In this regard, tracking the Vehicle Identification Number (VIN) discloses all you need to know about the car.

Note, however, that crooks may switch VIN or clone VIN, thereby concealing the history of the vehicle.

Some of the websites to look up the vehicle history are:

Buy from a Reputable Dealer

Buying a used car from a reputable dealer enhances the chance of not buying a title-washed vehicle.

You may further request a written title guarantee from the dealer. The dealer may not be willing to grant your request unless your urge. Additionally, check whether the name of the seller matches the name of the title.

How to Report Title Washing Fraud

You can report a title washing fraud to the local law enforcement agency, the National Insurance Crime Bureau, or your auto insurance company. Before you file a report, be certain that the seller is guilty of title washing fraud.

Typically, an insincere seller indulges in a title washing scam to erase the true title of a car from its history to be able to sell the car faster. In some cases, a car title is washed as part of the procedures to make a stolen car legal.

If you suspect that a used car has been title-washed, do not buy the car. You could be buying a severely damaged vehicle that poses a life risk.

Before you pay for a used car, endeavor to trace its history for the best possible information. Though the car may have been VIN-switched to conceal its history, you may be able to find helpful information regarding the title branding of the vehicle.